Early Order season is here! Contact your local rep to learn how to save!!

Benefits of Core Aeration in Turf 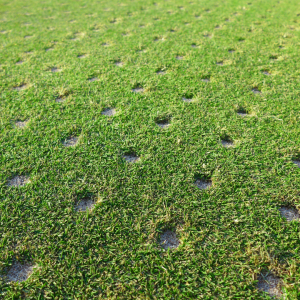 Educating your customers is an important aspect of ensuring turf is maintained to the highest degree. One turf cultural maintenance practice – core aeration can often be viewed as an unnecessary hurdle. Core aeration, however, has many benefits. So read on to find out the key benefits of core aeration in turf so you’ll be ready to explain next time someone asks – “Is core aeration really necessary?”

Relieving soil compaction is the primary reason core aeration was developed. Pulling cores and opening channels allows the surrounding soil to decompress. And then move into the voids, relieving compaction.

Create Pathways to the Root Zone

These channels create pathways for water, air, and nutrients to move deeper into the root zone. This benefits both turf and the soil microbes. Trials and real-world observations have shown time & again that turfgrass plants will quickly grow new roots into and down these channels, leading to many benefits for the plant.

A perennial coring program will help reduce thatch build-up in the turf. Since if a thatch layer becomes too thick, it becomes a barrier to water, air, nutrients, pesticides, etc., getting to the root zone.

All in all, don’t let core aeration be unclear or, even worse yet, a deterrent hurdle to the final decision-maker. Core aeration is well worth taking the time & effort to maintain your turf’s health. Additionally, anyone aware of all the positive aspects of core aerating turfgrass noted above should have no problem justifying this critical cultural practice.

Something in your inbox you need.

Product specials, useful tips & updates from are a click away.

Call your nearest Green Velvet location to place your order for pick-up or delivery.